This is part 4 of the series on AWS Cloudgoat Scenarios and the mitigation strategies.
In this part, we cover Scenario 6.

This part of the article presumes that Cloudgoat has already been configured.
Please refer to part 1 of this series to see how to install and configure Cloudgoat.

Description:
Start as the IAM user McDuck and enumerate S3 buckets, eventually leading to SSH keys which grant direct access to the EC2 server and the database beyond.
Alternatively, the attacker may start as the IAM user Lara. The attacker explores a Load Balancer and S3 bucket for clues to vulnerabilities, leading to an RCE exploit on a vulnerable web app which exposes confidential files and culminates in access to the scenario’s goal: a highly-secured RDS database instance.

The scenario has much more resources and terraform will take significantly longer. Maybe go grab a coffee?
This time, the scenario provides 2 sets of credentials.

Once again, we save the AWS credentials in 2 profiles: lara and mcduck

To destroy the environment after you are done, type: (IMPORTANT)
# ./cloudgoat.py destroy rce_web_app

For the first part of this scenario, we will use McDuck’s credentials.

As McDuck’s credentials does not seem to have much access, we used the enumerate_iam.py script to gather account permissions: We can also enumerate the S3 Buckets. Based on the bucket names, there are 3 buckets that may contain something interesting:
# aws s3 ls --profile mcduck

Next, we will try to list the S3 buckets’ contents.
Only the keystore bucket can be listed by McDuck.

Next step is to download the “cloudgoat” and “cloudgoat.pub” to our local disk.

Looks like cloudgoat and cloudgoat.pub is a SSH private key and public key:

Remember the EC2 instance that we found earlier? Let’s use the cloudgoat private key to SSH into the instance.
For the SSH user name, we tried several default ones (e.g ec2-user for Amazon Linux, ubuntu for Ubuntu) and found that SSH works for ubuntu.

Based on the information seen above, next we add the EC2 role credentials to a new AWS profile called ubuntu-ec2 using the AccessKey and SecretAccessKey:
# aws configure --profile ubuntu-ec2

Since it is also a temporary credential, we will need to add the token as well. Edit ~/.aws/credentials and add the token. The profile should look like this:

If we use the above profile, we can now access the other S3 buckets!
The “cg-logs-s3-bucket-cgixxx” bucket contains some ELB logs(which we will use later for Attack path 2) but the “cg-secret-s3-bucket-cgixxx” contains an interesting file called “db.txt” which we can download.

Remember that postgresql RDS that is found earlier? Take note of the endpoint and port of the database server.
In our case, the database info is:
Endpoint: cg-rds-instance-cgidt6a9ens032.cjj4hs1c7qjj.us-east-1.rds.amazonaws.com
Port: 5432
DB User: cgadmin
DB Password: Purplepwny2029

To access the Postgresql database, we will need the database client. If you are using docker (alpine linux), you can install the postgresql client using:
# apk add postgresql-client

Next, we will try to access the database and see what we can find there. To connect using the psql tool, use the following command:
# psql postgresql://cgadmin@DATABASE_ENDPOINT:5432/cloudgoat

However, if we try to access the database directly from the endpoint, we will find that it does not work. This is because the database endpoint resolves into an private subnet IP address:

Since we have SSH access to the EC2 instance, we can use an SSH tunnel to forward traffic through that EC2 instance.
The following command will create a listener on port 6234 on our local machine that forwards traffic to the database endpoint on port 5432.
The SSH flags -f asks the SSH client to background the process and -N flag tells the SSH client that only port forwarding is done.

After that, connect to the postgresql database through the local listener on port 6234.
The database server will prompt for the password (Purplepwny2029):
# psql postgresql://cgadmin@127.0.0.1:6234/cloudgoat

Next, use “\dt” to show all tables in the database and finally print out the super secret juicy info using a select statement:

We managed to retrieve a secret stored in the postgresql database.

This time, we will use the Clara’s credentials for the scenario instead.
Similarly to McDuck, we find that Clara has permissions to view certain S3 buckets, but in this case, Clara could only access the “logs” S3 bucket:

We can see that there is a link to a webpage at /mkja1xijqf0abo1h9glg.html which was accessed by users already.

However, since we have permissions to describe the EC2, we tried accessing the website using EC2 instance directly but it seems to be blocked: 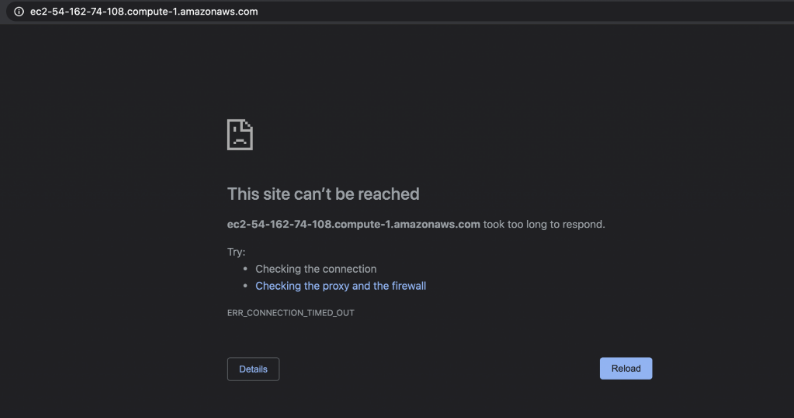 Next step is to retrieve the current ELB information using the AWS CLI.
Note: There are currently 2 types of ELB in AWS, Classic and Application Load Balancer; the AWS CLI commands for each type is different!

There is an application ELB; take note of the DNSName

If we access the ELB directly on the web browser, we get a webpage (http://cg-lb-cgixxxxx.elb.amazonaws.com). There is a hint of a “secret” URL which we already know (due to the ELB Http Log file).
Add “/mkja1xijqf0abo1h0glg.html” to the URL to access the secret page:

If we send a shell command at the input field, the web server executes the command and outputs to the web browser; essentially a remote command execution vulnerability.
Since the command is ran as root, we can pretty much execute any command on the server:

From the command execution, we can retrieve the EC2 role credentials (as in McDuck). 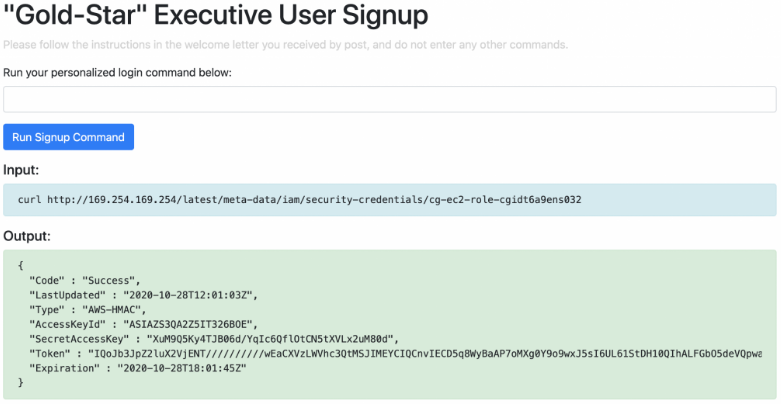 We can also query the user data from the instance metadata service (which would had made the McDuck attack much easier).

Lastly, the postgresql cli is also installed on the Ubuntu EC2, which makes our job easier (No need to SSH into the instance).

McDuck
SSH keys can be found in the cg-keystore-s3-bucket-cgixxx S3 bucket.
An attacker can take advantage of this to SSH into the EC2 instance, and then access another private S3 bucket.

Furthermore, there was a text file left behind which contains login credentials for an RDS database.
Finally, the attacker can use these credentials to access the RDB database and acquire the Super-secret-passcode stored in the database.

As the web application is ran on the root user, the attacker can exploit this vulnerability to run any command. The rest of this attack scenario is similar to the McDuck’s scenario.

Lastly, in both of the attack scenarios, the attacker can also access the user data in the EC2 instance, which also contains the super secret password.

1. Forward and store important logs into another separate AWS account. Ensure that there is limited access to it and provide write access to relevant services to put their logs into the S3 buckets, and read access to a trusted group of people. This can prevent attackers from accessing the logs.

2. Use well known web application frameworks to reduce risk of vulnerabilities such as remote command execution. Web developers themselves must be aware of secure coding practices.

We have reached the end of Part 4. If you find this helpful, please look at other parts of this article.